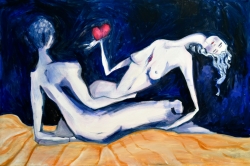 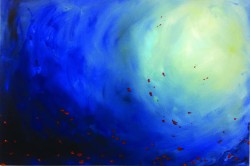 The series Les Incarcérés denounces the difficult time that the modern woman is going through. Behind the ephemeral promise of eternal beauty and youth lies the insidious risk of losing all the gains so far achieved with the consequent relegation of women to a passive role of “disposable”. Flakes as handcuffs to express the status of women today: a charming gift bag for a society that asks to the female body a good-looking but not to be himself. Les Incarcérés, 2011 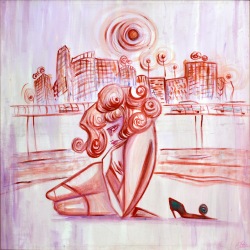 The series Purple Metropolis was created by Clelia Catalan during the London experience and emphasizes the reality often confusing and hostile in large cities.
Here and there, both natural (and ironic) take us back to a more human, albeit fanciful, as the meeting with the pig’s head that grins the girl hurriedly crossing the street while the clothes hung out to dry are the lure for the return in more intimate reality.
Purple Metropolis, 2011 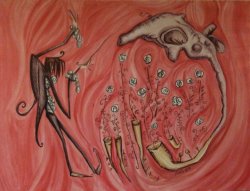 In Daydream (acrylic and watercolor on canvas, January 2010), the tension is released and the figures acquire lightness, flutter on the canvas and intertwine naturally with flowers, butterflies and jewels. A magic imaginary wand touches the boat and transforms it into a lamp that sounds like a gramophone. The music comes from the borders of the canvas and connects the series My orchestra where musical instruments are the real protagonists of the story.
Daydream, 2010

Extraordinary is the aura of mystery and tension of the series The tales adult (watercolor and acrylics on canvas, June 2009) obtained from desolate scenery and everyday objects, but used in an unusual way. In the artwork “La ballerina”, the woman’s body and her position crushed to floor, resembles the shape of an insect ready to hole up at the first sign of danger.
The tales adult, 2009